Whiplash is an elite enemy that was introduced during the 2013 Winter Update. He is confronted at level 45-50 and is currently the last elite that can be countered.

He uses the Rioter Ski Mask, Rioter Vest, and the Rioter Pants (from the Rioter Equipment); all of which gives him an overall of 7% agility, 10% Accuracy, and 10% health. He also uses the Dual Revolvers that were previously unobtainable before the Eastside District Update, in which it was available for purchase.

Killing him will drop one of the items listed below:

This elite is actually quite easy to kill due to his low spatial awareness.

As a suggestion, you should ALWAYS bring Stun Grenades to a fight that involves Whiplash (if preferred).

Whiplash almost never turns around, so sneaking behind him is the way to go. He also has terrible aim, sometimes he even misses you when you're in front of him. However, if spotted, his guns do high damage over a medium range, killing you under 4 shots. Also, as the Dual Revolvers that he uses do not have long range, so it can be a good strategy to use long range weapons; thus, it is recommended to stay out of the range of his weapon (and use something like the Howitzer Gun to defeat him). Another option is to charge right up to him with a strong close-quarter weapon like the Blunderbuss or the Double Barrel Shotgun to defeat him. Like Bio Hazard, he cannot shoot underneath his arm so charging right up to him and staying underneath his arm will prevent him from damaging you.

Due to the damage his weapon deals, it is suggested not to face him head-on. If using something like the Blunderbuss, make sure to move around him so that you are facing his back or his side whilst engaging with him to make sure that you don't get killed. As such, it is suggested to equip Agility boosting gear to make sure that you stay out of his line of fire. He rarely runs anywhere and will plant himself at a chosen spot and kill all the enemies in the vicinity before moving on to his next target.

Whiplash is currently a Permanent Elite when you reach level 45 and higher.

Killing Whiplash with a Blunderbuss or any shotgun might be easier as players can go under his arm and do more damage thus killing him easily. 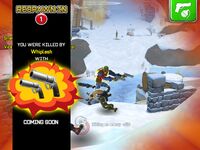 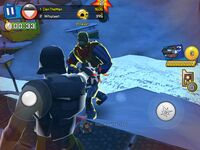 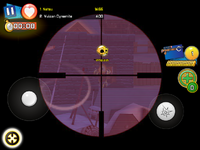 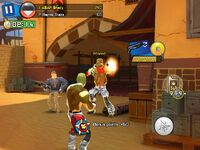 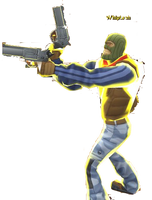 Whiplash shooting with his Dual revolvers.
Add a photo to this gallery
Retrieved from "https://respawnables.fandom.com/wiki/Whiplash?oldid=321663"
Community content is available under CC-BY-SA unless otherwise noted.