The Werewolf is an enemy that was added in the Spooky Nights Update on the 14th of October 2016. This bot will randomly spawn when any player was killed, during the event. Killing him will grant extra Spooky Points and will boost the progress of the player rapidly.

He gives the player who killed him 15 points during the event. Back then, the weapon he used was unknown to players (but it was later revealed on Christmas Eve of 2016 in the Winter Camp 2016 that the name of it is the Mechanical Claw Thrower, and it was available along with the Werewolf Armor, which is part of the Werewolf Bite. When he's summoned, he does so by what looks to be an explosion which is similar to how the Stay Puft Marshmallow Man and Great Nian spawn.

He only needs to hit you 5-6 times to kill you, and the rapid firing is very lethal if one does not pay attention or stands still right in front of him. Thus, movement is crucial to counter and dodge the shots.

Pretty much like most Elite Enemies, it seems like the long reach of their arms proved to be a disadvantage for them. This is due to they can't shoot any player who is standing very close to them. So, while equipping a heavy dealing weapon such as Double Barrel Shotgun and Blunderbuss one can easily damage the Werewolf significantly as long as they stay close and stay out of his line of shooting. You can also ambush him from behind when he's distracted.

One can also use Ghostbusters Trap to take the whole points for himself. However, take note that the Werewolf move very quickly and the trap can be a failure. Besides that, the Werewolf isn't immune to stun effects from the Stun Grenade. So, consider what is the best gadget to be used when you are up against him.

Killing one will give you 500 points. 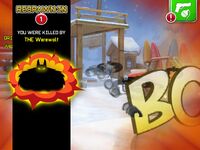 Being killed by The Werewolf.

Closer view on the side.

A closer look at the werewolf (Front View)

Interesting fact: It will target player(s) that shoot them, rather than shooting the nearest player.

The weapon he carries is the Mechanical Claw Thrower

A full-body view of the Werewolf.

Retrieved from "https://respawnables.fandom.com/wiki/Werewolf?oldid=315451"
Community content is available under CC-BY-SA unless otherwise noted.