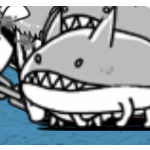 Yellow there person who has come to my profile page. I rarely edit this anymore, so it might be out of date.

Sort of active in game not much happens. The game keeps changing too much for me and old weapons are getting replaced by newer ones and there are probably still hackers playing.

Hackers where u go?

I am [RW] Dragon in game and am very skilled in most types of weapons and my primary and preferred weapon is the Dragons Breath Cannon although I don't use it when it gets nerfed and resort to the Heavy Shatterer which doesn't have a major nerf I know of. I love using the Headless Baron and plan on using it with any blue colored weapons or Halloween related during the week of Halloween. Poison users be gone. Railgun has become the new menace, along with the anti tank. I tend to use my outdated (but still very useful) White hero armor and Dragon's Breath Cannon in teams, the extra health helps me survive a shot from my own weapon but now it's mostly just to help aim and run around.

DBC makes a comeback in this CNY event.

I tend to like charging in without a plan but I do it by myself and do with a close range range weapon. Got Minigun and gonna use it to murder all those AGC spammers and OP weapons with buffs. I don't mind AS users but AS with S.F, nope. Plus you're a noob if you do. Those brainless railgun spammers made me change up strategy so now I camp around corners with my trusty DBC and it's able to strike them even when they're around a corner.

Railgun got nerfed, but I still use the DBC.

What has this game become.

Events I know I been in.

Some info about my life outside of Respawnables

I'm a Halo fan and love retro games considering I grew up with them I never got to play modern games. I'm quite skilled in the art of gaming usually besting my family and friends even with games I've never played before. (Halo 5 Guardians was a disappointment). I've started to catch up with the times but I'm still behind. War robots is currently my most played game and I outshine fellow players but occasionally I see someone better then I ever will be.

Of course I'm a pokemon fan and can name almost every pokemon in the pokedex given a picture, can also give the right typings for each pokemon without flaw. Ultra Sun and Ultra Moon were great but they should have been released first instead of Sun and Moon. I HAVE BEATEN THE SINGLE BATTLE LEGEND AT THE BATTLE TREE.

HA Universe 7 won the Tournament of Power, Eat it Bane.

Muh favorite weapons in the game are Ravening Silver, Blaze of Glory, Selene's Lance, and Beam rifle Alpha. Blaze of Glory and Selene's Lance are high tier weapons and are no surprise that I would use them. Ravening Silver and Beam rifle Alpha (Actually called Halo 2 Beam Rifle Alpha) are lower tier weapons but they attack a lot quicker which can mean the difference between getting a kill and getting killed.

1 of 26
Add photo
Retrieved from "https://respawnables.fandom.com/wiki/User:Dragonfruit2015?oldid=318020"
Community content is available under CC-BY-SA unless otherwise noted.