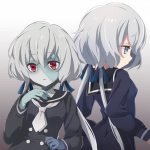 A Junko a day keeps the mushrooms away!

A lot of personal stuff is happening but I'll do my best to fill up what I can.

My ign in Respawnables is [CMb]Elite, I'm usually equipped with the Close-quarters Mask, Bunny Vest, and Bunny Legs, unless the current event or situation requires me to change armors. I normally don't follow the meta of the game, hinted by the lack of protection of my get up.

I hate players that play dirty and hack. I also have a hate for players that abuse other players(no honor), especially those that troll newbies hard. It's just not right and such actions can push potential players away from the game. Currently, I'm more active in Call of Duty Mobile.

I started playing the game before it migrated to a new app that everyone is using today. I used to play Respawnables on a daily basis, eventually it turned into 4 times a week, then becoming only when there are active events that I can compete in. The developers became too greedy and predatory to their player base which caused me to become disillusioned from playing and competing in events. Right now, with the hacking situation of the game, it became a pain to play multiplayer matches. Veteran players are progressively being replaced by new ones who are TOXIC. My support for the game will not be the same as how it was during the golden age of the game.

Retrieved from "https://respawnables.fandom.com/wiki/User:AerialPSG81?oldid=323080"
Community content is available under CC-BY-SA unless otherwise noted.