The Ninja is one of 4 new "Elites" Bots that was introduced in the Superstars (Event) and also appears in the Cyber Menace (Event) along with the Easter Bunny, The Yeti and The Cyborg. He wears outfit from the Cyber Ninja Gear and also uses the weapon from the bundle, the Dual Energy Pistols.

He gives Cyborg Points or Cyborg Oil when you shoot and kill him. His summoning animation is similar as the others, with an explosion. He is very lethal if you are facing him in close to mid range as his accuracy is just as good as The Yeti and Whiplash; additionally, his health is proportionally equal to that of The Yeti!

He can kill you fairly quick in close-range (though not stronger than the Yeti), as the Dual Energy Pistols is a great weapon so prepare a good strategy when going up against him. He can fire with a very fast rate, along with the fact that he can move fairly fast.

It's better to deal with him from mid range. If he spawns near you or comes near to you, do your best to either increase the distance to avoid his weapon's range, or stun him with stun gadgets (such as Stun Grenade or Energy Grenade); another method is to go up behind him then shoot, as he can't turn very fast. 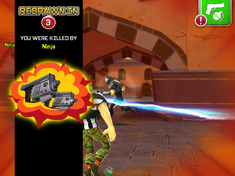 Being killed by The Ninja.

Closer look at the Ninja's back.

Earning points for killing the Ninja! 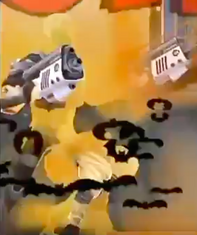 Summoning animation of the Ninja.

Being killed by the Ninja again. 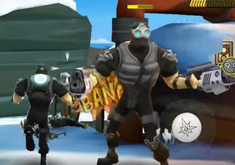 2 Ninjas being summoned!
Add a photo to this gallery

Retrieved from "https://respawnables.fandom.com/wiki/The_Ninja?oldid=318530"
Community content is available under CC-BY-SA unless otherwise noted.