Causes big explosion, and increases the rate of drop of Easter Eggs to 100% during the Easter Egg Hunt event

per purchase. Each purchase grants you 10 grenades.

It has the same properties as Super Grenades, except during the Easter update they gave you a 100% chance of getting an egg when you got a kill in team mode.

Pretty much like its cousin Super Grenades, it deals bigger damage with a shorter fuse, making it very efficient to use. Your enemy will have a hard time trying to dodge this. It is also difficult to even see this grenade coming towards you. Thus, a very nice, fast, powerful grenade to use, especially when you will get a confirmed Easter Egg drop (only during the Easter Egg Hunt event).

The strategy is, to keep your distance a little bit so that you won't got caught in the blast, and throw it to your enemy. Sounds quite simple, but for the inexperienced ones, this is a tough challenge. They may even Kamikaze themselves, thus leaving the Easter Egg for somebody else. It is suggested to practice using the normal Hand Grenades first, while keeping in mind that, the Super Easter Grenade is much more powerful, and has a shorter fuse.

Overall a good gadget to use during the Easter Egg Hunt event, but not effective against players wearing the Anti-Explosive Gear and the Easter Bunny Vest. 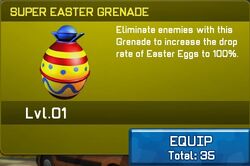 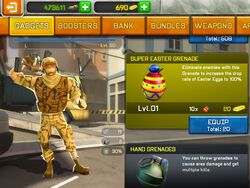 In the shop
Add a photo to this gallery
Retrieved from "https://respawnables.fandom.com/wiki/Super_Easter_Grenade?oldid=193118"
Community content is available under CC-BY-SA unless otherwise noted.