Identifies the location of every player on the map, including opponents using stealth.

The Spotter is the seventh gadget to be unlocked and was added during the Movie content update. It costs 1,250

per 5 spotters and is unlocked at Level 12. When used, they identify the location of every player on the map, including those that are using Stealth and Ninja Bomb.

A grey orange device with a green radar screen and an red button. Has a stubby, fat antenna on the top. If you look closely, the radar screen has circles on it. While using the spotter, yellow colored arrows indicating your opponents will show up on top of them.

Spotters can easily help you to locate your opponents, and even able to reveal opponents using stealth! These gadgets come in handy when playing on a big map or when few players are playing with you. Use them if you are impatient to wait for one to come to you. Snipers can also use them to make pre-emptive attacks and plan ahead when attempting to defeat an opponent.

Of course, spotters have weaknesses, and one is that it neither attacks an opponent, nor does it boost the user. It is purely used for locating, and if cornered, offers no help whatsoever. If faced with many players, it is recommended to forego this gadget as you will not need to look far to find an enemy. Still, spotters are fun to play around with, and can be essential to organizing an ambush attack. 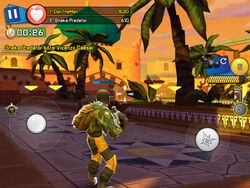 The Spotter in use 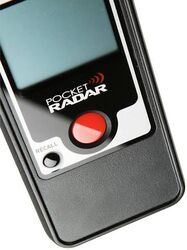 Pocket radar with a similar look to the spotter
Add a photo to this gallery
Retrieved from "https://respawnables.fandom.com/wiki/Spotter?oldid=299444"
Community content is available under CC-BY-SA unless otherwise noted.