1 of 4
Add photo
The Soccer Madness  is an Event released that was released when the Soccer Madness (Update) came out. It was divided into 2 trials and started on 8th June 2016. It is based on the COPA America and the European Cup 2016, and features the Soccer Jerseys!

The main task on this Event was to kill as many enemies with hand thrown explosive gadgets (in Missions Mode and Mulitplayer).

The gadgets that were allowed are: 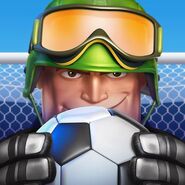 Add a photo to this gallery
Retrieved from "https://respawnables.fandom.com/wiki/Soccer_Madness?oldid=310625"
Community content is available under CC-BY-SA unless otherwise noted.