The Sandtown map takes place in a Middle Eastern market district where you will see sandbags and explosive barrels scattered everywhere. There is also a crashed fighter jet that has had its wing ripped off and will lead you up to a rooftop that provides an advantage point above your enemies. Be careful though because there is limited cover up there from the building across the courtyard. You can hear gunfire from what sounds like fighting further away from the map's location if you listen closely.

The map is good for starters. It is a very small map with various cramped passage ways and two ramps that can provide a view above the battlefield, making it good for close quarters combat or hit and run. It also has two sniping spots that are located near a wrecked fighter jet and one near an Armory which can be accessed after running up the stairs from the building across the armory. The best place to use is the refugee site that is located across the armory, which has two areas of ambush: either from the roof or the lobby. It's recommended not to camp near the sandbags when the explosive barrels are present; but once the barrels have been destroyed it can be used to hold off bots that prefer mid-range combat or as an escape route. Some of the popular guns on this map are Howitzer Gun, Guitar Machine Gun, Blunderbuss, Double Barrel Shotgun, and the variants of the Sniper Rifle. Overall this map is suitable for every weapon from every range. 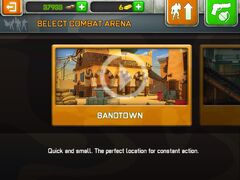 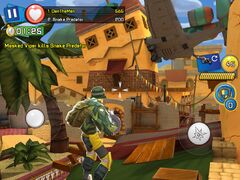 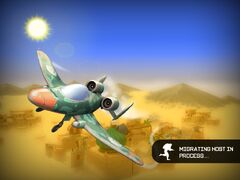 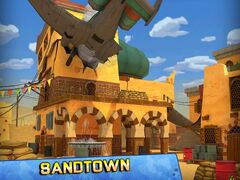 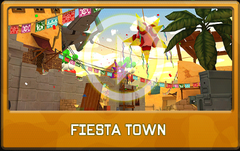 An in-game look at a part of another re-made map, Spookytown!
Add a photo to this gallery

Retrieved from "https://respawnables.fandom.com/wiki/Sandtown?oldid=322550"
Community content is available under CC-BY-SA unless otherwise noted.