The Saint Patrick (Event) is an event that went live on March 11, 2016. In a fashion similar to the Easter Egg Hunt events, the player must collect as much

as possible, which sometimes appear when an enemy is killed, in order to progress through the event. You also have a chance to collect a lucky Pot of Gold that is worth 20

if you bought the Double Gold Booster!).

Normally, a player adds only 1

to his meter for every one picked. However, the update introduced two new bundles which both contain a head item that multiplies the 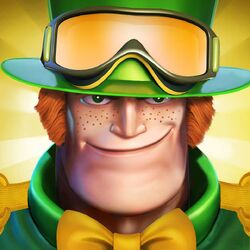 Add a photo to this gallery
Retrieved from "https://respawnables.fandom.com/wiki/Saint_Patrick?oldid=314845"
Community content is available under CC-BY-SA unless otherwise noted.