Start a Wiki
The Royal Garden is the third map that is available in Respawnables and is unlocked at level 10. It has been available since the release of the game. The center of the map is a wide open space, with two rows of plants separating the garden into three parts. Parts of these rows have collapsed, allowing for easy accsess between the three parts of the court. There are also sheltered places around the garden, with pillars which players can hide behind from explosions. There are two ramps on each side of the map that lead up towards the second level, a partially collapsed balcony, from which you can travel towards the other side of the map without being caught in the crossfire, if any, that goes on below. One of the ramps is made of stone, while the other is made of wood. There is a building which you can access and use it for long range kills. The rest of the map is made out of passage ways and small open spaces, a few posters pasted onto the walls.

The Royal Garden is good for sniping e

experts, who can use the building to snipe down their targets. In addition, their only pathway can be set with mines and trap medals such that if the opponent tries to engage in close combat, he will be defeated by them. The area, however, exposes the player and gives less cover to the sniping spot available. This makes Sandtown somewhat better for snipers as there are more sniping spots (for example the area on the roofs on top of the houses) and more cover is given.

The royal garden encourages players to equip more agility boosting clothes. The more agility players have, the faster they can run across the open space to the other side. There is also a building located near the entrance of the garden in front of the hay bales that can be used as a good hiding spot for players to ambush their opponents.

Explosive weapons can easily take out groups of enemies from above, thus it is advisable to attack in two squads - one on each ledge on either side, in a pincer formation, such that the opponent is overwhelmed.

Flare guns are also useful due to the large narrow hallways people run towards so you can hide and cap them from a distance rendering Blunderbuss or any short range weapon useless.

By far the best map for sniping. Make sure to take cover when possible, you have wide open long sightlines. Fragging people with snipers should be easy.

The royal garden is possibly located in the Middle East at a Palace in an unknown part of the country, possibly Baghdad. 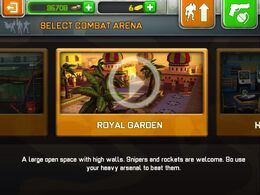 Map selection for the Royal gardens 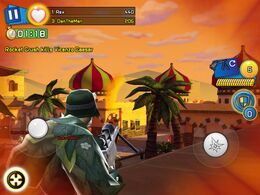 Sniping on the Map of Royal Gardens

The Royal Garden
Add a photo to this gallery
Retrieved from "https://respawnables.fandom.com/wiki/Royal_Garden?oldid=299790"
Community content is available under CC-BY-SA unless otherwise noted.