• Tier 10 of the Fastest Gunslinger (Event)

The Pocket Pistol is a handgun that was available as the final prize in the Fastest Gunslinger (Event). As indicated by the name, it is a very small pistol (approximately at the size of your hand in the game). Despite being almost as small as the Noisy Cricket, this timid looking weapon is not something to be taken lightly.

It shoots out 4 shots per second, and you need approximately 5-7 shots to kill your target (assuming no headshot ever occurred). Due to its size, you can run around the map with a great agility. It has 20 rounds in a clip and only 2-3 seconds of reloading. However, the limitation of this handgun is its range. The range is not too long; about as long as the bridge in the map Nocturnal Snowfall/Snow Village.

Thus, exploiting Run And Gun strategy is a great approach to maximize its potential in any match. Especially in a small map such as the Sandtown, you can dominate the match easily with some strategic movements. Against the Revolver at close range, this weapon proved to be superior due to its rapid rate of fire.

Even though Camping isn't really an option, you can take cover at any corner or edge of any wall. Shoot everyone who is running towards you. It might not too effective at first, but it works better than waiting for the enemy to pop up in front of you.

Overall, a small weapon with a huge potential. This weapon proves that size doesn't matter.

Earned through the final tier of the Fastest Gunslinger event 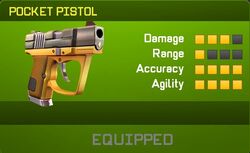 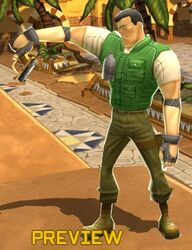 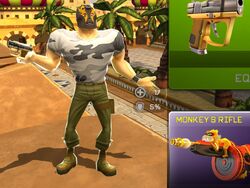 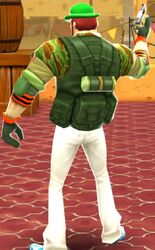 The PW-9 from Afterpulse, the inspiration for this weapon
Add a photo to this gallery

Retrieved from "https://respawnables.fandom.com/wiki/Pocket_Pistol?oldid=319779"
Community content is available under CC-BY-SA unless otherwise noted.