Nightmare is an elite enemy that is encountered when a player reaches level 39. He wields the Double Barrel Shotgun , making him a fierce enemy at close range. 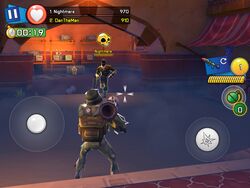 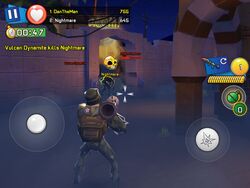 Nightmare Fleeing from Combat
Add a photo to this gallery

Nightmare can be defeated in many ways. Snake Predator and Rocket Crush can weaken Nightmare making it slightly easier for a quick take-down. Weapons that inflict high damage such as the Bazooka, Sniper Rifle, Missile Launcher and the Revolver, Thumper, Howitzer Gun, Dragon's Breath Cannon, Hunter Shotgun, Shockwave Launcher, Double Barrel Shotgun, Siege Cannon, Fire Fist, Hunter Rifle, Automatic Shotgun can bring him down if they are used correctly. But if using the Sniper Rifle, shooting him in the head will distract him, making him move closer to your sniping spot like other Elite Enemies.

Stay away from his line of fire. To stay away, you need to go around him quickly using Agility based armors. If you see him in front of you and he slows down, that means he takes quick aim for around 3 to 5 seconds then you're dead.

If possible, equipping Leprechaun's Hat, Close Quarters Vest, and Biker Pants altogether will completely nullify the damage from his Double Barrel Shotgun, which makes the fight extremely easy. Plus, you will receive 50% protection against Vulcan Dynamite's Shotgun.

Nightmare's equipment consists of 12 percent Agility, and 5 percent health. His high agility can overwhelm slow players and even weaker bots but his lack of health makes him weak against explosives. The Double Barrel Shotgun despite its powerful damage also leaves him vulnerable when he's reloading similar to the same weakness that Vulcan Dynamite  has as well. Also because of his Double Barrel Shotgun's higher bullet count he is much slower when reloading.

Retrieved from "https://respawnables.fandom.com/wiki/Nightmare?oldid=301463"
Community content is available under CC-BY-SA unless otherwise noted.