Killing them gives 500 Good Fortune Points without any multiplier.

Pretty much the same as its distant cousin (kind of), the Slimer, this Nian moves around the map once spawned. Although, unlike its cousin, this Nian does not speed up when shot by any explosive weapons like the Howitzer Gun and Thumper. It will speed up only when it got hit by other non-explosive weapons, with an exception of the Fire Fist.

Best weapon to use is either the Howitzer Gun or the Thumper. Although people choose the first one, as it outranks the latter in term of rate of firing and the ammo capacity. 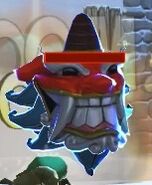 500 Good Fortune Points per kill, before any multiplier. 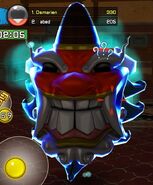 An upclose view of a Hungry Nian.
Add a photo to this gallery

Retrieved from "https://respawnables.fandom.com/wiki/Hungry_Nian?oldid=298706"
Community content is available under CC-BY-SA unless otherwise noted.