This week has tiers which involve completing missions, at a rookie difficulty, as the name implies. It started on October 16th and ended on October 23rd.

The main objective of each tier is to kill enemies with Explosive Candies or Halloween Grenades, reaching the required kill number on the tier. It started on October 23rd and ended on October 30th.

During this week, all you have to do is kill as much as you can! Every kill is equivalent to 5 points. However, there are some exceptions as shown below:

This week started on October 30th and ended on November 6th.

The tasks on each tier are very much like those in the first chapter but are a bit more difficult this time. It started on November 6th and ended on November 13th.

In tier 10, assuming you won all your matches and you didn't leave the game between matches, you should be able to complete the tier in a minimal time of 1 hour and 10 minutes. 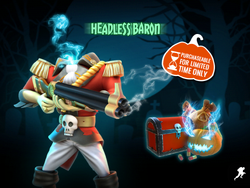 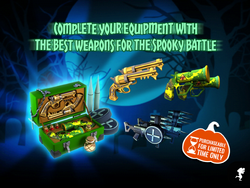 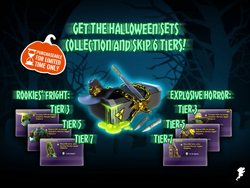 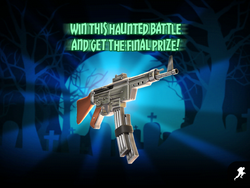 Add a photo to this gallery
Retrieved from "https://respawnables.fandom.com/wiki/Halloween_Haunt?oldid=308974"
Community content is available under CC-BY-SA unless otherwise noted.