The Great Nian is one of the Nians in the Chinese New Year (Event), Chinese New Year 2 (Event) and Chinese New Year 3 (Event). It is the hardest nian to kill due to the large amount of health it has. It shares the same attack as the Stay Puft Marshmallow Man from the Ghostbusters 30th (Event) by creating a deadly shockwave when it stomps the ground, damaging nearby players severely or even kill them if too close.

Pretty much the same as the infamous Stay Puft Marshmallow Man, first thing to do is keep your distance. The last thing you want to do is get cornered by this Nian, and get caught in its shockwave. It is recommended to use the Stun Grenade or the Energy Grenade to slow down the Nian, so you can maximise the amount of damage you can inflict on the Nian. Although the latter is far more expensive, as it requires Gold to purchase it, the Stun Grenade is a much better choice.

Explosive weapons are recommended as well to maximise the damage output. The Howitzer Gun gives the best result, as its projectiles are fast, and the ammo capacity is far greater than the other weapons in its class. Besides, it deals 40% more damage towards it. Thus, more Good Fortune Points is earned. Explosive gadgets can be used as well, with a 60% damage multiplier to the Nian. However, this Nian moves away from any Firecracker thrown towards him, so be sure to change the gadget to something else. If you are feeling lucky, you can stick with the Firecracker. 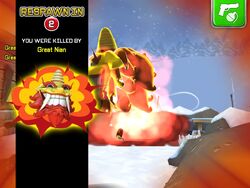 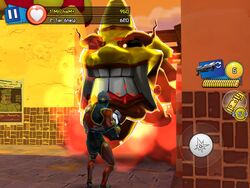 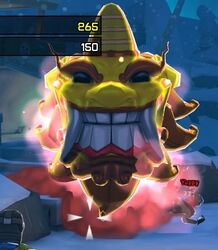 He is approaching. Fast 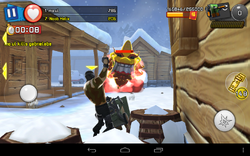 Coming towards me
Add a photo to this gallery

Retrieved from "https://respawnables.fandom.com/wiki/Great_Nian?oldid=298703"
Community content is available under CC-BY-SA unless otherwise noted.