Absorbs every enemy in a radius of ~5 meters and then instantly kills them.

Place these down in place where there is multiple enemies, or more specifically, when you're surrounded by lots of enemies about to run towards you. These take a while to activate but once it does, it sucks in all enemies and ghosts within its radius and kills them. Use these for slow enemies or for the tough Stay Puft Marshmallow Man as it will kill anything it sucks in. Despite the power of these gadgets, these are quite easy to avoid, as the gadget takes a while to activate. The effective radius is not too large, so it is possible to escape it. As these are hard to earn, it is recommended that you save these for the Marshmallow man. 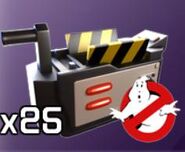 A replica of the Ghostbusters Trap, used in the movie
Add a photo to this gallery
Retrieved from "https://respawnables.fandom.com/wiki/Ghostbusters_Trap?oldid=308423"
Community content is available under CC-BY-SA unless otherwise noted.