The Ghost Nian is one of the weakest and the most common Nian to capture in the Chinese New Year (Event), mainly due to the fact that upon the player's death, they will spawn and remain stationary (similar to the Ghost from the Ghostbusters 30th (Event)). It looks like a Lion and Dragon hybrid. It is also the weakest compared to the Great Nian and the Hungry Nian.

Killing the Ghost Nian gives the player 100 Good Fortune Points for the kill.

This Nian is quite easy to finish, like Ghost during the Ghostbusters 30th (Event) but with a bigger health. Each explosive weapon such as Bazooka, Howitzer Gun, and Grenade Launcher deals 40% extra damage, and explosive gadget such as Firecracker, Hand Grenades and Ultra Grenade deals 60% more damage towards the Nians.

If you use Howitzer Gun, just shoot it twice. For Thumper or Dragon's Breath Cannon, just one hit. For Grenade Launcher, you would need two shots.

Overall, just use explosives. Although Fire Fist deals quite a decent damage towards this Nian. Other non-explosive weapons can be used to kill these, but it takes a longer time, and more shots. 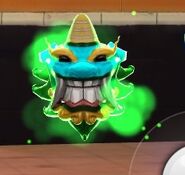 The Ghost Nian is always at idle. 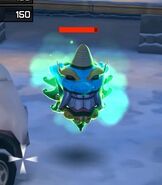 You will get this amount of Good Fortune points, before any multiplier.
Add a photo to this gallery

Retrieved from "https://respawnables.fandom.com/wiki/Ghost_Nian?oldid=298707"
Community content is available under CC-BY-SA unless otherwise noted.