The Ghost is one of the AI bots and temporary enemy introduced in FFA in the Ghostbusters 30th (Event) (that also made a return in the second Ghostbuster event, the Ghostbusters (Event). Capturing a Ghost gives +50 score points. If you capture one with full health, it will give you around 150 Ectoplasms.

Ghosts were enemies that could be fought temporarily at Free For All multiplayer mode during the Ghostbusters 30th Event. They have chance to spawn when an enemy is defeated. They do not damage players, so not much strategy is required to beat or capture this ghost. It is recommended to use energy weapons like the Proton Gun, Tri Barrel Plasma Rifle, Plasma Punch, Zap Gun and the Plasma Shotgun because it deals double damage to the ghosts. You can also use powerful weapons like the Blunderbuss or Howitzer Gun to defeat these foes. The Thumper also kills the ghost instantly with just one shot, so it can be used too. 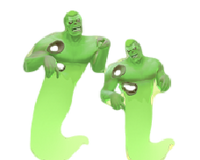 Retrieved from "https://respawnables.fandom.com/wiki/Ghost?oldid=298708"
Community content is available under CC-BY-SA unless otherwise noted.