The Frozen Bay is a map that was added in the Elysium update. It can be considered as a Snow Village's sequel but the theme is the same and it is unlocked at level 24.

It is similar to Snow Village. Except it features a wrecked submarine within it as some kind of bridge to connect the middle arena and the higher grounds. Also it acts like Blizzard's battlefield.

Just use the same strategy that you use in snow village. Except, you must use faster skill to do this. This map is ideal for both sniping and running. One very good team combination is 2 snipers and 2 blunderbuss/revolver users. The close-range combatants will run around lushing out/killing the enemy team while the snipers can take out any long range threats to the aforementioned. While this may seem quite unfair to the snipers as blunderbuss users tend to kill everyone, the first reflex when cornered by a close range combatant is to back away immediately, towards the open areas covered by the snipers where they stand a fighting chance. The sniping spots are on the top of the submarine, and on the top of the map where the turrets are. I would advise the snipers to equip mines as their gadget and lay them near the staircase or in the middle of the submarine. Note, the open area at the middle of the map is a dual kill zone in an overlap of sniper fire. It is a definite kill zone. Another strategy applicable on the map is to hide high up on the submarine, hidden from view by the large fin, and wait for unsuspecting enemies to run down the slope leading to the passage to the submarine, then jump down upon them, firing your close range weapons.

This map is highly hazardous, and difficult to manoeuvre around. Many hiding places in the inner cave spell bring doom for unwary victims who get caught in ambushes, as the red mist shrouds all but the enemy in front of you. 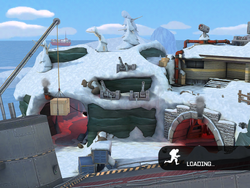 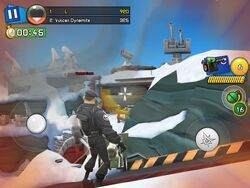 A view from the wrecked submarine 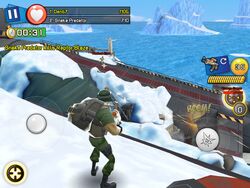 A view from the top cliff 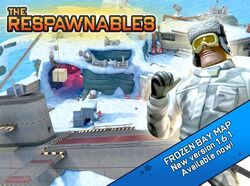 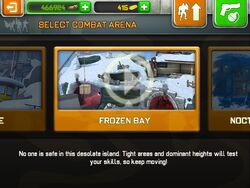 The crashed/wrecked submarine in Frozen Bay

During the Saint's Patrick 2017 Update!

Add a photo to this gallery
Retrieved from "https://respawnables.fandom.com/wiki/Frozen_Bay?oldid=299851"
Community content is available under CC-BY-SA unless otherwise noted.