The Dual Airsoft SMG is a weapon that was introduced in the Earth Day Update. It could be obtainable by completing Earth Day, but now is only available through various bundles.

The Dual Airsoft is a direct upgrade of its single counterpart; the Airsoft SMG. With increased ammo capacity and power, it is able to kill enemies under 1-2 seconds. However, its performance is a little bit worse than the Dual Rookie Machine Guns (another event-exclusive weapon) and very similar to the Dual Machine Guns by range and power.

Use it as if it was the single counterpart but better (Run And Gun) because it has a very fast fire rate and large ammo capacity. Since it has a not-so-good accuracy (not ammo-durable), make sure you aim properly between short-mid range to prevent wasting ammo. When confronting any shotgun users, make sure you back off while firing at them, or else try to circle around them to make them lose ammo.

It is a good weapon, but rather an alternative to the other two dual machine guns if you don't have them.

As seen in the shop

As seen in the prize shop 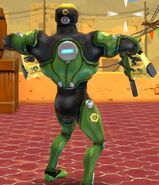 Reloading the weapon (2)
Add a photo to this gallery
Retrieved from "https://respawnables.fandom.com/wiki/Dual_Airsoft_SMG?oldid=315873"
Community content is available under CC-BY-SA unless otherwise noted.