1 of 7
Add photo
The Close Quarters Pack is a bundle that was released as soon as the Summer Camp started and also made a return in the Summer Camp 2. The bundle contains an equipment set that provides 7% Agility and 20% Health. The set also provides 60% damage reduction from the Blunderbuss, Shotgun and Double Barrel Shotgun and also contains 75 Immunity Shields.

during the Summer Camp and Summer Camp 2 respectively. The contents could also be earned separately by completing the tiers of both Events.

It was once, purchasable again during the Memorial Weekend Sale at a higher price of $9.99

This was a limited time offer only. 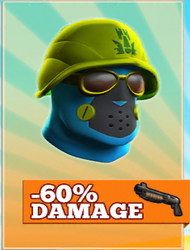 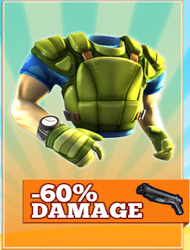 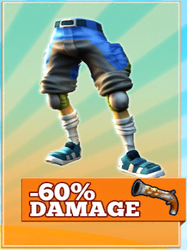 This bundle is really useful against Shotguns like the Double Barrel Shotgun or the normal Shotgun because they won't be able to kill you instantly anymore. It also turns the Blunderbuss a 2 - 3 shot kill Weapon, depending on the range. You would only suffer 40% of the damage given by the Shotguns. Use this bundle to your advantage and kill as many Shotgun users as you can. With the additional 75 Immunity Shields, you are able to have longer fights and acquire more kills.

However, don't be too confident with this Bundle because you are still vulnerable to other types of damages, such as Explosives or Energy Weapons. And be careful! This Bundle does not protect you from Automatic Shotgun or Aristocrat's Shotgun!

Retrieved from "https://respawnables.fandom.com/wiki/Close_Quarters_Pack?oldid=308918"
Community content is available under CC-BY-SA unless otherwise noted.