HAPPY CHINESE NEW YEAR AND YEAR OF THE ROOSTER, SOLDIERS!

The sun rises high and the streets are full of colours, garlands… and 3 weeks of fun on Respawnables! Either if you are a warrior, a ninja or just a soldier your duty is now getting the maximum points catching Nians to get incredible rewards!

ARE YOU THE GOLDEN WARRIOR OR A ROOSTER?

This is the year of the rooster, and for that reason, we have prepared a brand-new rooster set! But it will not come alone, only for the best warriors we also have a new golden armor! Which one do you prefer? Maybe their amazing weapons will make you chose: the incredible Fire Clacker versus the Explosive minigun!

So… how do you want to start the new Chinese Year? Will you fight for the victory and became the new golden hero or do you prefer to cluck?

Start playing now and discover many other surprises we have only for the best soldiers… and happy new Chinese year 2017! 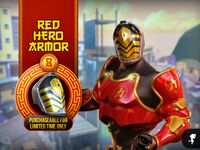 Add a photo to this gallery
Retrieved from "https://respawnables.fandom.com/wiki/Chinese_New_Year_3_Update?oldid=316859"
Community content is available under CC-BY-SA unless otherwise noted.