Start a Wiki
The "Hunt Unit MK II" is a bundle added in Zombies vs. Zombies Update. It costs $14.99 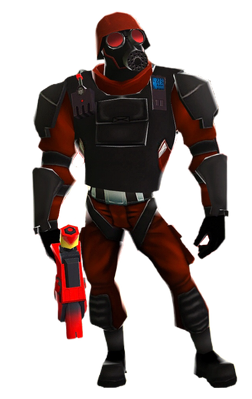 The Hunt Unit MK II equipped.
Add a photo to this gallery

When it comes to this Unit, the best strategy is a Run And Gun, as your increased damage with your weapon, moderate protection against Fire Weapons, and a decent speed increase for each kill with your fire weapon, overall, this gear is relatively OK; but where this pack truly shines is in Hordes mode as you may deal slighly more damage, tank another hit from a non-explosive zombie, and run much faster with the more reliable yet heavier anti zombie weapons.

Beside the gear the weapon itself is not the powerful in either Multiplayer or Hordes for that matter as it is easily outclassed, but more importantly is it was offered to Free-to-play players, and for what its worth now (300

) it still does not make the cut, so with that said the player should rely, surprisingly, on a Camping strategy, as what this weapon does not lack most of is range, ping players three times from afar to guarantee that they will fall.

Retrieved from "https://respawnables.fandom.com/wiki/%22Hunt_Unit_MK_II%22?oldid=322371"
Community content is available under CC-BY-SA unless otherwise noted.